Together our partnership
can make it happen!

It all began in 1979 when a group of locals created Fantasy Fest to bring visitors to the island during slow season – October. Over the years word spread all over the world of the extravaganza, bringing people from all walks of life to Key West to participate in this 10-day festival. 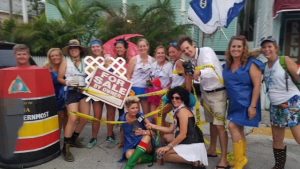 This year’s Fantasy Fest drew thousands of visitors to Key West despite Hurricane Irma hitting the Keys just a month before. In the weeks leading up to the events, there were mixed feelings from locals and tourists alike on whether or not to participate. Many wondered if tourists were going to cancel their pilgrimage to the wild and wacky affair while others pondered how to have a good time while being sensitive to the distress of the residents in the Lower and Middle Keys. Many locals decided to support the event and come together for a fun filled week of costumes, community and excitement. 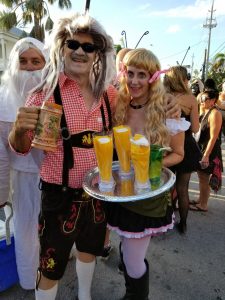 We all watched as the resilient community of Key West rebounded and put on, in some opinions, the best Fantasy Fest yet! The 10 day festival included the annual Zombie Bike Ride, Tutu Tuesday, a pet masquerade, a local’s parade and of course, the extravagant official Fantasy Fest Parade. Locals showed that not even a Category 4 hurricane can interfere with the eccentric, carefree spirits of those who call the Keys home.  Key West rebounded from the destruction of Hurricane Irma and with some time,  the upper and middle keys will too. In the meantime, let’s stay #KeysStrong!

The real estate market is bouncing back as well. Berkshire Hathaway partnered with Fantasy Fest with a Fantasy Fest Parade of Homes! Both locals and visitors came to take a look at some of the best properties in Key West. Real estate agents, lenders and experts are wondering about the future of the market post Hurricane Irma. I am confident the Keys’ busy real estate market will return shortly. Stay tuned for future open houses!

Some of Our Recent Reviews